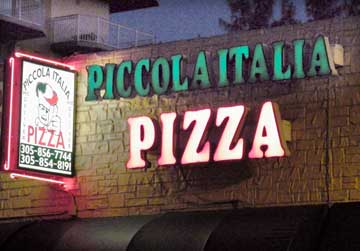 A couple of years ago, Erwin came to me and asked me to make a simple web site for his pizza business. “Nothing fancy, you know, just the basic information, phone number, address, maybe the menu, just so that people could find us online.” I told him that just because he will have a web site, people will not automatically know that his business existed. But somehow, he thought that “if you build it, they will come”. So I did build it. But did they come?

A year passed by. One day, Erwin asked me to build him another web site, this time for his newly opened landscaping business. “How much money did you make with the pizza web site?” – I asked him, though I already suspected the answer: nothing, of course – but at least people knew “he existed”, right? Wrong.

I told Erwin that it would be easy for me to pocket a few hundred dollars more from him just by slapping together a few pictures and some text and making them into a web site. But if he wanted “people to come”, I warned him that he would need to do a little more than that. It was called “marketing” and it required a little more than just saying the business existed. It would bring new customers to his doors and it would make the existing ones more loywal. Erwin was the first to recognize it: he didn’t know much about it. In the next couple of months, he learned. Ebiz Miami turned Piccola Italia into an internet marketing success story. We revamped his web site, carefully chose useful keywords for SEM (Search Engine Marketing) started Google Ads and Facebook advertising campaigns, created special discounts exclusive to his online customers (eSPecials), went as far as giving away pizzas every week. His business became much more popular. People started subscribing to the email list to get the weekly specials, we created buzz about his yummy dishes on Facebook. This, of course, didn’t happen over night.

A few months later, by chance, I meet Erwin on the street. “I looked at my database today, and I saw 1500 more customers than the last time I checked it. I have no idea where they came from, I didn’t do anything special to bring them in.” I told him that by the end of the year we were going to look at more than his database. We would look at his sales figure. We did. It had almost doubled.

How was that possible? In four “easy” steps:

Today, Piccola Italia makes money off line and on line. Soon, they will open another location. The marketing efforts are minimal, the maintenance costs for the web site and the online ordering system are being paid for out of the online profits exclusively. Seeing sales receipts of thousands of dollars only from online sales puts no doubt in Erwin’s mind that going with eBiz Miami, Inc. for saving his business was the right move. You can read his review HERE